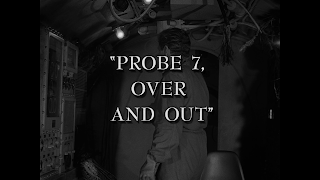 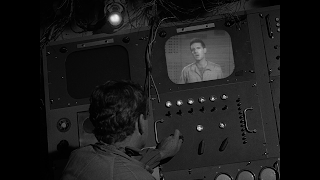 Rod Serling’s “Probe 7, Over and Out” introduces us to Colonel Adam Cook, whose spacecraft has crashed into an unknown planet. He manages to establish visual contact with his superiors back home, who give him the unfortunate news that all-out war is imminent, and that their world is doomed. Stranded with no hope of rescue, he ventures outside into the lush, unspoiled garden-like forest…. and discovers that he’s not alone. 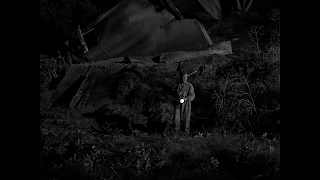 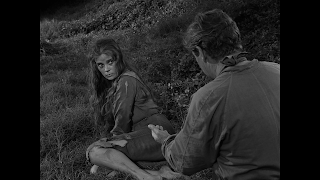 Another stranded space traveler, Eve, greets him with a rock to the head and a scratch across the face. After these initial hostilities (foreplay?), she warms up to him and they head off into the sunset together. Sound familiar? Have we perhaps seen this story played out before? You could cite the Book of Genesis, but you’d only be half right.

“Probe 7, Over and Out” is a shameless copy of season three’s “Two,” right down to the verbose male lead and the black around the female’s eyes. The only significant difference is that this swipe at the laughable Adam and Eve cliché is that here, in this second pass, there’s virtually no attempt at subtlety (she even offers him an apple, fer chrissakes!). “Two” was wise enough not to go there; but then, that (superior) episode wasn’t written by Serling. 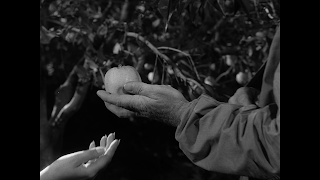 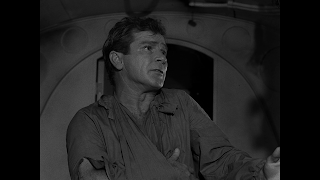 We can also thank Serling for Cook’s endless philosophical musings on the nature of man, which I’d be a bit more accepting of if at least some of them were done in voiceover; as it stands, Cook’s constant talking to himself just feels clumsy and awkward (season two’s “King Nine Will Not Return,” also written by Serling, is helped immeasurably by the voiceover approach).

“Probe 7, Over and Out” is fine enough on a visual/technical level, thanks largely to the impressive life-sized spacecraft. The wrecked ship was purchased from Daystar Productions, which had built it for the Outer Limits episode “Specimen: Unknown.” Its image was also was inexplicably used by Bif Bang Pow! on the card backs of their 2012 TZ action figures, even though they've never produced any collectibles based on this episode (and they sure as hell haven’t produced any Outer Limits stuff, despite my incessant begging). 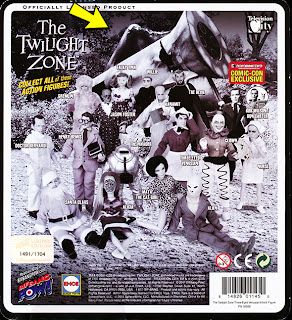 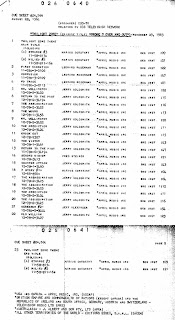 Most of the underscore in “Probe 7, Over and Out” is culled from Jerry Goldsmith’s “Back There” score from season two. These cues were used to great effect in season three’s “To Serve Man”; here, however, they sound a bit out of place (“Uncle Simon” suffered a similar problem). “The Outer Space Suite,” or maybe “Where is Everybody?” (both by Bernard Herrmann) would've probably worked better. I guess I should be grateful they didn't use Nathan Van Cleave’s “Two” score…! 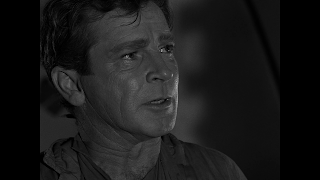 Richard Basehart (Adam Cook) is probably best remembered for his role as Admiral Harriman Nelson on TV’s Voyage to the Bottom of the Sea (1964-68). IMDB lists an uncredited role as “Shakespeare-Reading Tape Recorder Voice” on an episode of Lost in Space (“The Derelict”); I’m only mentioning it because of the many connections shared by TZ and Lost in Space (Robby the Robot's fraternal twin the B-9 Robot, Billy Mumy, Jonathon Harris, etc). 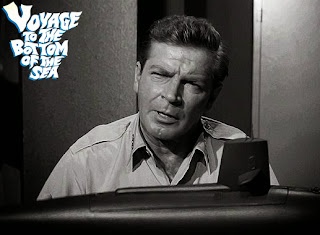 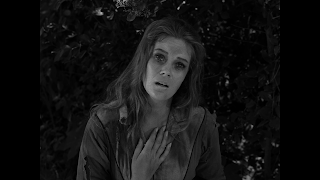 Antoinette Bower (Eve Norda) is probably most recognizable to genre fans as Sylvia in the “Catspaw” episode of the original Star Trek; however, Bower appeared on many genre TV series throughout the 60’s and 70’s (including Mission: Impossible, The Invaders, and The Six Million Dollar Man). 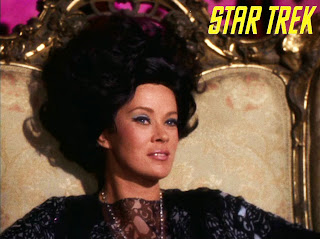 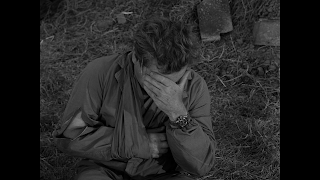 My overall analysis of “Probe 7, Over and Out” can be boiled down to six words: been there, done that, over, out.


Next week:
War games are afoot, but Matthew Broderick is nowhere to be found. 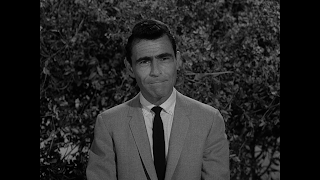 "Probe 7, Over and Out" is my nomination for TZ's worst episode. On another blog I posted the following (some punctuation corrected):

"... even by November of 1963, the SF 'Adam and Eve' story was so trite, you couldn't wedge one over an editor's transom with axle grease and a pry bar. Second, two castaways from different worlds crash on a human-less Earth within walking distance of one another [and within their same lifetimes]. Third, the writers can't seem to understand the difference between "galaxy" and "solar system." Fourth, at the end Col. Cook tells Norda his first name is Adam and--surprise, surprise, surprise--Norda admits her first name is Eve. And of course, coming from different star systems with different evolutionary lines, their DNA will happen to be compatible enough for procreation. This episode does not even rise to the level of 'execrable.'"

Overall, the TZ episodes have not stood the test of time. The original Outer Limits episodes fare much, much better, and several are still classics and viewable with expectation and pleasure ("O.B.I.T", "Don't Open Till Doomsday", "The Guests", "The Architects of Fear", etc.)

I think TZ episode "Probe 7 ..." is entertaining and worth watching, especially for TZ fans who may not have seen it years ago when TZ was in re-runs. Of course, the meeting of Adam and Eve from different star systems is highly improbable and their DNA is likely very different and incompatible for procreation, etc. But it seems to be one interesting play on an old myth. Enjoy TZ at your fingertips at home on a quiet evening!!

This "works " best as a true relic of the old Right Stuff era, which to affectionados has a charm and gravitas that may be totally lacking in Post Apollo Space Pop Culture.
Other "plusses" perhaps for just the aura of the Moonshot Era: Richard Basehart, definitely a poster performer for this period by way of Voyage ; Antoinette Bower likewise as the wacky Sylvia in the best of the Treks , the high camp Original Series. You would never again see a "witch queen of outer space" dangling an Enterprise reduced to a toy over a lighted candle in any of the subsequent dry and self important "space shots" made since imitating TNG became the big game changer.
Lots of pure Kamp from the era of Captain Video to the end of that era with Tales of the Gold Monkey (early 80s) on the Small Screen and the 3 Original and Best Star Wars movies. Popcorn over Pretense, in a way , the "right stuff"?

Have been re-reading your comments and those of others and have been wondering IF this idea COULD have worked well in some ...other...form. Lighter, perhaps, a bit bouncer. A "lark" without the speechifying. The trick would be to carefully pull this off without being charged with "irreverence" , especially in a polarized social and political environment on the eve of Vietnam escalation...Advertising and sketch TV comedy have made use of "the apple" for some time (note Laugh In sketches) but then do we know WHY Rod Serling made use of this storyline. Did he want a space age preaching pulpit for something general or specific and would any location do , or did he really want to take on this base as a ----for TV , anyway--- novelty item?